Just yesterday,  I was excited to see that Dr. Megan Schwamb, who discovered 2007 OR10, had decided to name it.

I had somewhat randomly chosen this dwarf planet to use in my novel–Prelude: The Expanding Seas of Earth.  Moreover, early this month I had contacted both Dr. Megan Schwamb and Dr. Mike Brown, and asked why no one had ever named it. I even offered my suggestion for a name–mentioned in my author notes (see below)

Dr. Brown promptly replied to my inquiry, saying to stand by–the name would be coming very soon. A nice surprise! Technically, his right to name it expired in 2017 (after ten years). And no one has bothered in the two years since… until now.

Dr. Megan Schwamb and her colleagues have now provided their favorite choices, and invited astronomy fans to help select which one will be officially submitted. Hopefully, some preferential consideration will be accorded them. After all, they found it.

I also hope they won’t be offended that my story’s characters used it for target practice…. I can assure it was all for a good and necessary cause, and that no major planetary features were harmed in the exercises.

And while anyone can now officially submit a suggestion to the International Astronomical Union (IAU), I won’t be among them. I think those who found it should still have final say. These are the people whose work and dedication inspire us to look outside our small world… and dream.

From my author’s notes:

Kuiper Objects – When this story was written, 2007 OR10 was still the correct designation for the dwarf planet Maggie’s crew uses for target practice. However, by the year this story begins, someone will probably have already named it–thus a potential story flaw.

Naming rights for 2007 OR10 expired in 2017, so technically anyone can name it. The International Astonomical Union adjudicates this, and there are strict guidelines as to length and type–for instance, no pet names.

Professor Michael E. Brown***(Caltech), who held the rights, never officially named it. However, he did nickname it “Snow White” for being bright. He has a healthy sense of humor–it was the seventh dwarf planet his team had discovered since 2002.

Dwarf planets must either be very bright or very large to be detected. It was later determined 2007 OR10 was larger and reddish in color, suggesting presence of methane frost. So the nickname no longer quite fits. The good news, from my perspective, is that Snow White had a sister named “Rose Red”. Serendipity methinks! Still, I restrained myself from calling it “Rose Red” in the story. If someone named it otherwise between 2017 and publication, I’d have egg on my face.

Thankfully, given the transit time round trip between K’Laadia and Earth, Khreseea could only have uploaded Earth’s Kuiper Belt data prior to 2017. Thus they couldn’t have learned the new name.

***2007 OR10 was discovered by California Institute of Technology astronomers as part of the PhD thesis of Megan E. Schwamb, who was at the time a graduate student of Michael E. Brown.[15] (cit. Wikipedia). Hopefully, she ultimately gets to name it (only seems fair). 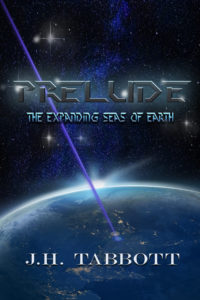 FYG – The Tides of Earth starts off four days after The Expanding Seas of Earth ended. But to make it accessible to readers who may not already have read Expanding Seas, it was necessary to quickly establish the where’s and why’s of what Maggie and her crew were about to do.

My natural instinct is to hew toward subtlety–something I enjoy when reading–but which doesn’t always work when there’s a ton of detail readers need. So I’ve tried to use it sparingly, but to avoid heavy-handedness bringing readers up to speed. Still, by the end of the first  two (short) opening chapters, I trust readers will have a handle on the main events of the first story.

Obviously, if you see it differently, now would be the ideal time to tell me. I can still tinker with my words up until actual publication, and will consider thoughtful comments. The copy below is already result of some well placed suggestions made by my local critique group. Previous readers will find symmetry  between this opening chapter and that of The Expanding Seas.  It’s deliberate. I liked the idea of the story having come full circle.

For newcomers, please note I try my best to assure the science in my stories is within the realm of current scientific knowledge and theory, and to avoid including “made up” science. Real science offers more than enough incredible ideas to be explored. And I think it’s very important for people to understand the difference between the two.

The first chapter is below–more of a teaser, but with hints of the backstory. I’ll post a chapter each week. So without further ado, I hope you’ll enjoy…

Prelude: The Tides of Earth – Chapter One – The High Blind

The Earth shone brilliantly below. Sparse clouds crabbed aimlessly across its seas and continents. The moon–brighter than seen from any of its crusty shores–peeked around the horizon. Occasionally, a glint of light–as a stray satellite caught a beam of sunlight. Maggie drew a deep, appreciative breath–awed by the beauty and satisfied that conditions would be perfect for today’s precision operations.

The control room’s wall and ceiling screens provided a clear uninterrupted image of everything outside the ship. There was reverent silence. No one wanted to disturb the stunning view.

Mike sat at the center weapons console and checked his settings once more. Adjustments weren’t really needed, but with what was at stake…. He’d check still again.

Tracy hardly breathed. A loose blond bang flopped across her forehead. Gone were her perfect tresses, cultured in life before their own ship had been hijacked. She squinted, bit her lip, and scanned the screens intently. No telltale signs of an attack. A comfort. Earth’s major powers may have agreed to cooperate, but only because there weren’t viable options. All it took was for one of them to take a pot shot.

“No,” But Tracy barely moved her head. Her eyes were still drawn toward the panorama.

“Don’t be. Even if they could see us, our defensive canisters would take out any missiles… besides, why wouldn’t they want to know first what they’d be up against!” Mike offered a reassuring smile.

Tracy took a deep breath and returned to surveying the screen.

Sorry kid, Mike thought, but it was you who convinced us!

Today was Show and Tell. They’d demonstrate to the United Nations the full power of the K’Laadian weapons. The return to Earth with their prize had been difficult. The decisions they’d made were harder. But there was no going back.

We’re in it now! Mike knew. It’ll only get tougher from here. Whatever it took, they would buy or pry away whatever government support they’d need to build a planetary defense. We can do it, he promised himself. We are formidable! 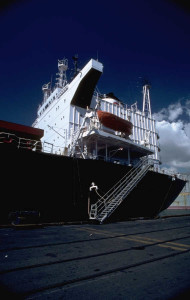 I have just resumed working on this vessel agency handbook after a lengthy hiatus concentrating on my (more fun to write) first science fiction novel.  And as I progress I will periodically post excerpts for those rare  few souls interested.  Please note these aren’t  in finished form. Those posted here will be further edited for readability and content–a most tedious but necessary process.

I’ve learned much about writing and publishing over the past five years, so have found that setting and making deadlines is as important in writing as it is in handling a ship’s port call.  Thus target date for official publication of Water Clerk is March 15, 2020… the “Ides of March” (for those liking literary drama).

In the meantime, I shall welcome comments, critiques, and questions regarding the excerpts posted here.  Constructive dialogue can only benefit the project . With no further ado, below find the Introduction and the Table of Contents for Part One….

The purpose of this book is to provide not just an understanding of a vessel agent’s role, but an introduction to the basics of agency operations and logistics, and—finally—a better understanding of the problems of agency management. It is a tutorial of the “hows” and “whys.”
A newcomer to this industry is typically thrust immediately into situations where their awareness and independent judgement are as important to their survival and success as their ability to memorize procedures and accurately complete paperwork. The hand-holding period where the more experienced agent shows how certain things are done… is invariably short. If you are new, very soon you will be on your own. That is the typical pace.
Some newcomers thrive on the novelty of the business, the variety of new responsibilities, the pace, the odd hours, and the early opportunity to be entrusted to work on their own. They feel invigorated. Many others will find these same conditions only stressful. Everyone are gaited differently. It may not be right for everybody, but the marine industry tends to grow on you.
Today’s vessel agents need to learn patience and a myriad of other skills—including, ironically, when not to be patient. The better your personal knowledge and your understanding of how things work, the better you will be able to react, respond, and grow into your job. And the more valuable you will make yourself to both your customers and your company.
The title of this book, “Water Clerk”, is a diminutive label a close friend and ex-sea captain once joked was the common term for vessel agents in Europe. It deliberately suggests an unimportant role.
However, the truth is that a vessel agent can have a greater impact upon the costs, the success, or the failure of a port call than any other player. It is up to you to remember that the only way your role as a ship agent will ever be unimportant, is if you personally make it unimportant. If you learn your trade and accept the responsibilities it entails, you will become the knowledgeable and dedicated ship agent your customers and your company needs.

Note:  As I put together this handbook, I was faced with two difficulties. The first was how best to organize the material into a natural progression, where readers could assimilate the concepts first, then consolidate that knowledge by seeing actual practices. The second difficulty was determining how to cover the incredibly dull basic materials without readers committing suicide or avowing to become an accountant instead—two roughly equal choices.

However, it is extremely important the terminology provided is clear and accurate, because many are legal concepts. And in the maritime community, huge sums of money can ride on getting details right.
So I came to the following compromise—to issue this hazardous warning:

Be advised that materials in sections Getting Acquainted, Types of Agency Services, and Roles of an Agent are, at points, both mind-numbingly boring yet absolutely essential to learn.
I have added  comments, where possible, to break the bleak monotony. However, I recommend—if getting bored to tears or passing into REM sleep—temporarily jump ahead to the section Getting Things Done.